Law firm Sintons has been shortlisted in two categories of the North East Dealmakers Awards 2019.

The Newcastle-based law firm is widely recognised as one of the region’s leading corporate advisers, and regularly acts in many of the most significant deals in the North East and beyond.

Over the past year, Sintons has again completed a host of major high-profile transactions, with some recent examples including the rescue of one of the region’s oldest retail brands, The Pen Shop, from administration; the acquisition of Team Valley-based TDX by an Italian counterpart; and the acquisition of car sharing pioneer Cowheels by a major European car sharing club.

Adrian has been shortlisted in recognition of his expertise in completing many major transactions over the past year, as well as his client-focused approach and commitment to securing the best outcome for them. Many of his clients have been with Sintons for many years, which is indicative of the quality of advice and service Adrian and the team offer.

Dealmakers, run by Insider Media, are highly-esteemed annual awards which recognise and reward the outstanding work of individuals and organisations within the corporate sphere in the North East. The winners are decided by an independent judging panel of leading names within the North East business community, and are revealed at a dinner on Thursday, September 26, at the Hilton NewcastleGateshead.

Karen Simms, head of the corporate and commercial team, at Sintons, said: “For many years, we have been rightly regarded as one of the leading corporate advisors in the North East and beyond for the depth of expertise and capability we have here, and our ability to advise on the most complex of matters which often require completion against the tightest of deadlines. We have the breadth of specialist knowledge at Sintons that few can rival, which is why we are the trusted long-standing advisor to so many clients, and the reason we are regularly instructed to act in many of the biggest deals in the North East.

“We have a deserved reputation as one of the leaders in our field, and we are delighted this has again been recognised through our shortlisting as Corporate Law Firm of the Year at Dealmakers 2019, and Adrian being named as a finalist in his own right is further evidence of the strength we have here at Sintons.” 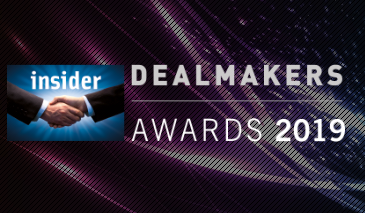