Three aspiring solicitors at Sintons have taken on leading roles in an organisation which champions and supports young lawyers in the North East.

Caitilin Hepworth, Saffron Sinclair and Rose Foster have all been appointed to positions within JLD North East, the organisation which represents junior lawyers in Newcastle and the wider region.

Caitilin, a second year trainee at Sintons, has become Chair of the group, and also continues in her role as national representative, which she has held since joining JLD North East last year.

Solicitor apprentice Saffron has been named as the representative for other solicitor apprentices working in law firms and in-house roles across the region through the North East Solicitor Apprenticeship (NESA) programme, of which Sintons was a founder member.

Rose, who recently joined Sintons on a two-year training contract, has become social secretary of the group, and will lead on a range of social initiatives for the thriving young legal community.

Trainees and young lawyers at Sintons have, for many years, been involved in developing a thriving group for those new to the profession, which allows lawyers at the earliest stages of their career to develop their professional networks, relationships and reputations.

Claire Atkins, head of HR at Sintons, said: “The development of a professional and social network at the earliest opportunity is such an important thing for a young lawyer to do, and will stand them in great stead for the years ahead. Sintons has a longstanding presence in organisations which promote the importance of this, and we have been a supporter of JLD North East for many years – indeed many of the senior lawyers we have here now have been past members.

“For Caitilin, Saffron and Rose to all be playing such a significant role within JLD North East is fantastic and we at Sintons are very pleased they have put themselves forward in this way. We have no doubt they will be great assets and will continue to develop the organisation and its vibrant community of young lawyers across the region.” 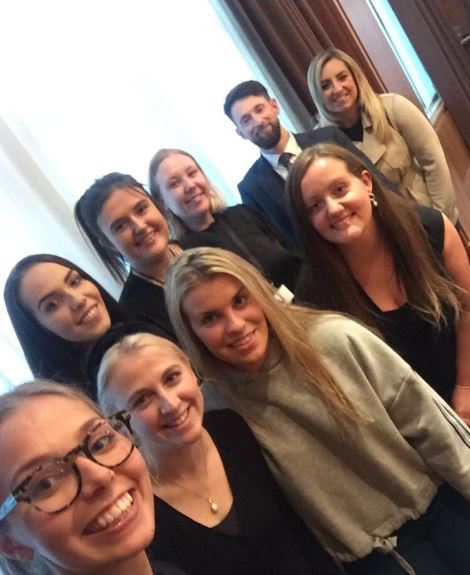