A team of specialist serious injury lawyers are taking on a gruelling trek for the second consecutive year, in aid of a children’s charity.

Sintons’ neurotrauma team are again taking part in the 25km Peak District Challenge, a route which involves an ascent of over 700 metres and completion in only nine hours, to raise vital funds for the Child Brain Injury Trust.

The eight-strong group last year raised £2,100 for the much-loved charity through the Peak District Challenge, and is seeking to again donate a significant amount to the Child Brain Injury Trust through its efforts in September.

Sintons works closely with the charity through its role in supporting young people and families whose lives have been affected through serious injury, and last year was named as the Child Brain Injury Trust’s sole legal support service provider in the North of England, in recognition of its national reputation for its legal capability and client service.

In addition to its participation in the Peak District Challenge, the law firm has has raised thousands of pounds for the charity in recent months though an array of other events including a race night and festive family cinema day.

John Davis, consultant in Sintons’ fast-growing neurotrauma team and one of the UK’s leading serious injury lawyers, said: “Having worked with the Child Brain Injury Trust for many years, and seeing first-hand the crucial role they play in supporting young people and their families during some of the most difficult and traumatic times imaginable, we are delighted to again take on this challenge on their behalf.

“The Peak District Challenge was undeniably tough but was a great team-building exercise, and to raise over £2,000 through the support and generosity of so many people was fantastic. We are very grateful for the support we’ve already had this year. We will again be training together as a team so we’re fully prepared to take on the challenge whatever the weather or conditions out there, and are looking forward to September.” 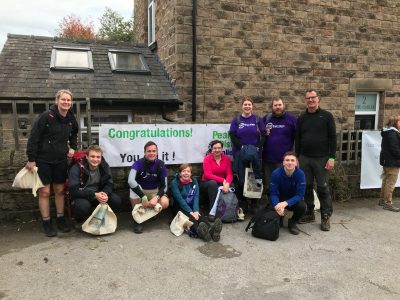