Sintons’ cyclists raise over £2,000 in Coast to Coast challenge

A team of cyclists from law firm Sintons have completed a cycling challenge in aid of a regional young people’s charity, raising vital funds and awareness of its work in the process.

The five-strong group took on the 140-mile Coast to Coast route from Whitehaven to Tynemouth over three days, completing the challenge on Sunday.

So far, more than £2,000 has been raised for the If U Care Share Foundation, smashing the initial target of £1,200 they set for the charity.

The County Durham-based charity promotes and supports emotional wellbeing in young people, and offers specialist help to those affected by suicide. It was founded by the family of Daniel O’Hare, from Great Lumley, who took his own life aged only 19.

Daniel had never shown any signs of being troubled and had no history of mental health problems, so his mother Shirley, together with brothers Matthew and Ben, and cousin Sarah, founded If U Care Share as a resource for other young people.

The Coast to Coast event had an added poignancy as it coincided with what would have been Daniel’s 31st birthday.

The Sintons team – trainee solicitors Andrew Noble, Laura Tennet, Jonathan Tutu and Ria Wilkinson, alongside facilities assistant Simon Anderson – have secured their fundraising total through sponsorship alongside a number of events held in Sintons, including a dress-down day, bake sale and a strawberries and cream event to coincide with Wimbledon.

Shirley Smith, Daniel’s mother and founder and development manager for the charity, said:  “We are so grateful for the support from Sintons. Their fundraising efforts will help us to continue to save lives, support communities and prevent suicide across the North East. ” 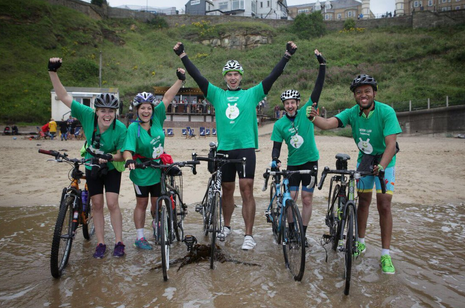