Football tournament to raise vital funds for Daft as a Brush

Law firm Sintons is hosting a football tournament in aid of Daft as a Brush, as it nears its £15,000 fundraising target for the much-loved charity.

The five-a-side football tournament is being held in September and will be the latest in a series of  events organised by Sintons in aid of its staff charity. A number of teams have already pledged their support, but places are still available.

The tournament, which is open to both men and women, follows hot on the heels of other major fundraising initiatives held in aid of Daft as a Brush, including a hugely popular netball tournament, a golf day – the biggest Sintons has ever held – and its Sintons’ Singers festive choir, which performs in a number of locations at Christmas.

The football tournament will help Sintons move closer to its target of raising the £15,000 needed to buy a liveried ambulance for Daft as a Brush, to increase its provision for transporting chemotherapy and radiotherapy patients across Newcastle, North and South Tyneside, Northumberland and Durham.

Mark Quigley, managing partner of Sintons, said: “This is the latest in a series of hugely successful events we have organised, which have been enjoyed by everyone taking part and have raised many thousands of pounds in the process. Daft as a Brush is a charity which has touched the hearts of so many people and we are delighted to lend our support. We are getting closer all the time to our target of being able to purchase a new ambulance, which will be a fantastic achievement, and we are grateful to everyone who has so generously supported us.”

* The football tournament takes place on Thursday, September 19, from 2pm to 5.30pm at Goals in Gosforth. To enter a team, which can be of up to 8 people, costs £250. Please contact peter.jennings@sintons.co.uk to pledge your support or click here for further details. 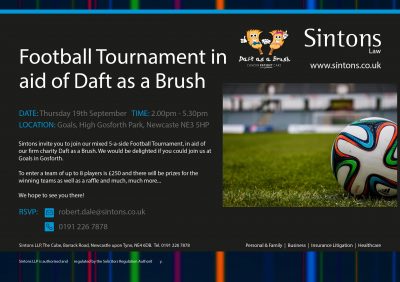