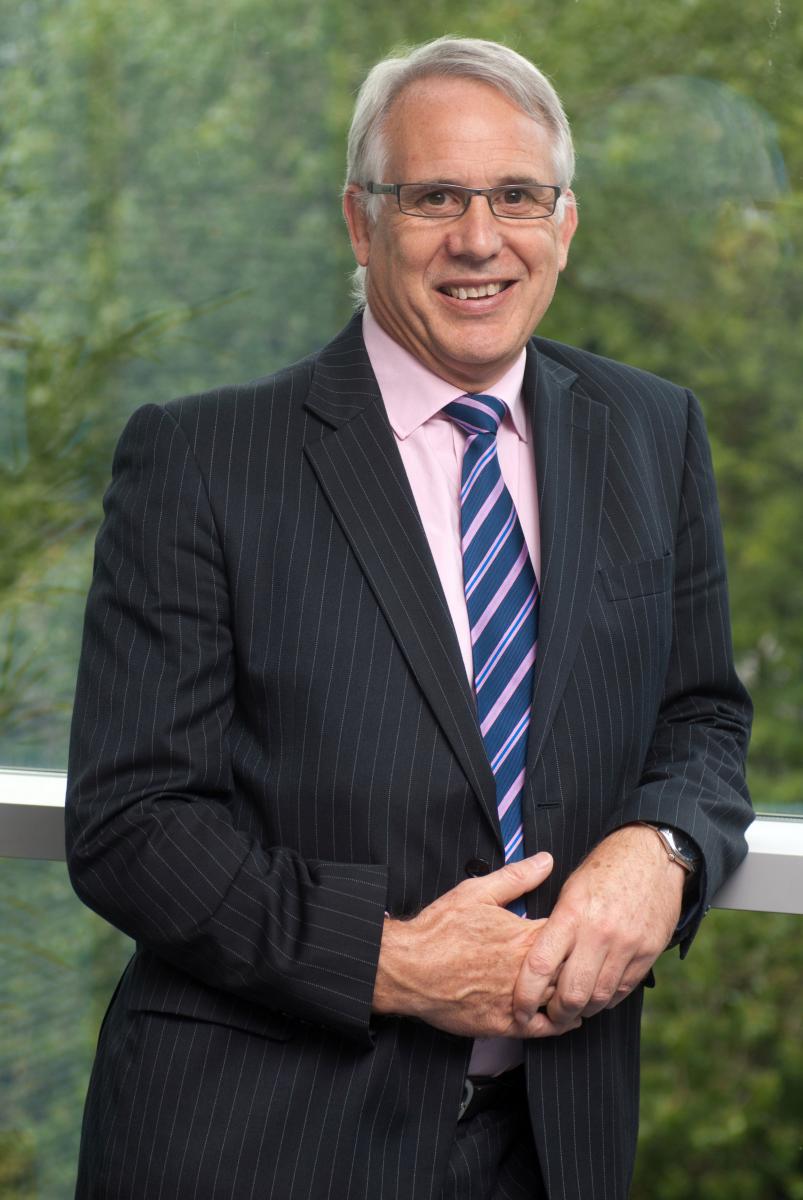 Alan Dawson, Sintons newly-appointed chairman, has witnessed many changes in the legal world and foresees many more, as he explains to Peter Jackson.

ALAN DAWSON’S first contact with Newcastle-based law firm Sintons was not an encouraging one – they turned him down for a job.

He recalls with a smile: “I always tell our graduate applicants that when I applied you sent off applications to everybody you could think of to see whether you could get a training contract and, ironically, I got a rejection from here.

“I only got in because the guy they offered it to took a job elsewhere.” That, however, is water under the bridge, and 54-year-old Dawson is now chairman of the firm and he has one of the few offices in the building on Barrack Road most of the building being open plan and with a view across Barrack Road to St James’ Park.

He is a genial man and his manner is relaxed and easygoing. With neatly trimmed grey hair, flashing smile and sharply-cut suit covering a frame, which – he tells me proudly – has recently lost three stone, the initial impression is more of an advertising executive of the Mad Men era than a lawyer.

But he is a lawyer to his bones, having been in the profession for more than 30 years. He suspects his father having been a police sergeant and his mother a former police officer sparked an interest in the law from an early age.

He was born and brought up in Westmoor and, in 1976, went to Hull where he read law, and then Newcastle Polytechnic to qualify as a solicitor. He did get offers from firms in Hull but, when Sintons changed its mind, it was his preferred choice because he wanted to return to the North East.

He was staff partner from 1998 to 2003 and, since the beginning of the month, has been chairman of the firm. And this is a firm which has changed considerably since he joined it more than three decades ago, having grown from about 35 staff to around 200.

“It has grown hugely and it has changed hugely in the 30 years I have been here,” he says. “When I started in 1988, we were a firm that did principally defendant insurance work acting for the big insurance companies such as Eagle Star or Norwich Union and, in those days, that would probably have been 75% of the business. The remaining 25% would be an amalgam of the private client, anything from house conveyancing, to divorce, to wills, probates, trusts and business-type transactions such as the buying and selling of shops, and lots of commercial leasing-type work.”

But in the late 1980s, when the insurance companies began to cull the panels of law firms that acted for them, Sintons had to realise that reliance on one sector made it vulnerable.

“We needed to expand the breadth of the firm. So, in terms of the insurance work, we moved from the defendant work to the claimant work – the poacher turned gamekeeper. We also expanded all the other areas of the firm and, from there, we tried to develop more specialist areas. We are still very well known in litigation work both on the defendant side and the claimant side, but there’s much more of a balance now between that work and the other areas.

“We identified in the corporate commercial field that, in this area, there are lots of owner-managed businesses or family businesses which are still big companies which want good-quality advice locally and don’t want to go to Leeds or Manchester or London and pay those prices.”

The firm focused on those businesses and adopted a strategy of offering its full range of services, mindful that a business client could also be a private client and could have children who might also become private clients.

The Sintons story is by no means unique all of Newcastles leading half dozen law firms have similar records of growth over the past three decades, even if some of them have not achieved that entirely organically. But all of them, including Sintons, have benefited from long-term developments in the legal sector.

“When I started in the 1980s you had lots of small firms which were two, three or four-partner practices. Over a period of time, those practices disappeared, mainly because of regulatory changes, and it became clear that small practices weren’t going to continue. A lot of the growth came from picking up work from those smaller firms.”

Also, during the boom Thatcher years, a lot of the bigger law firms concentrated on the sexier big-ticket corporate work and disdained private client type work an area to which many are now scrambling to return. This created further opportunities for firms such as Sintons with an interest in private clients.

The growth of the firm meant that the management structure had to change. In the past, management roles were divided among the partners with perhaps one looking after professional indemnity insurance and another taking care of IT – roles which were in addition to fee-earning work.

“As we grew, it just became illogical and financially wrong that we as lawyers were trying to do all this increased admin work. We appointed a practice director in 1998 and effectively gave control of directing the firm forward to him.

Now the firm has some 200 staff, including 26 partners, and has an annual turnover of about 12m. But, unlike other Newcastle law firms, it has no national ambitions.

“I see us still very much as a regional firm. Our priority and focus is on the North and serving the people in the North. We do work all over the country but we don’t see ourselves as looking to compete with the big top 20 London firms – that’s a completely different world,” says Dawson.

“We have never had a branch office and I don’t see the need of branch offices. They are an expense and an additional headache. With modern communications, you can always have a Skype conference with somewhere in Devon or deepest Wales, its so easy.”

Sintons’ decision to diversify and to develop private client work has paid rewards during the recent economic turmoil.

“One of the things that has helped us through the recession is the breadth of work that we have got, so we weren’t hamstrung like some of the firms who had taken their eye off what – in the good days – were some of the less remunerative areas, such as the private client-type work.

“We have still had quite a nice balance. Having the litigation base has also been a massive help because that’s been completely unaffected by the downturn.

“During the difficult years, we didn’t lose anybody here, we actually saw it as an opportunity to do some lateral hiring when people became available in areas where we see, when we come out of this recession, there’s going to be work available.”

These are areas where the firm is strong, such as leisure and the health sector, including dental and care homes.

Should Dickinson-Dees’ proposed merger with Bond Pearce go ahead, he sees possible opportunities for other regional firms “if they Dickinson Dees take their eye off the North East market.”

Even when the economy picks up, he is convinced that only the fleet of foot will keep up in a constantly changing legal sector, with organisations such as Tesco and the Co-op moving into legal services and new regulations in 2013 on referral fees for personal injury work.

“The market has changed and the market will continue to change. We’ve got to wise up, we’ve got to be able, in certain areas, to commoditise the products. The challenge we are going to face is being able to do that in a way which is financially viable for us but, most importantly, still provide the client with the level of service that’s needed.”

In the shorter term, does he detect any green shoots of recovery?

“It’s difficult. It’s impossible at the moment to plan with any kind of predictability from month to month whats coming in work-wise, certainly in relation to private clients. We have seen more activity in corporate and commercial over the last 12 months where the lenders have loosened their purse strings, but its still more and more difficult to get deals across the line and funders’ requirements are so much more stringent. I would like to say I can see green shoots but I think we have probably got another 12 to 24 months of pain to go through.”

And his strategy is “to keep the ship steady, to ride the ship through the storm and to grow where we can see opportunities for growth”.

Dawson is married and has three children, of whom the youngest, Kayleigh, 19, is at university in Cardiff and is a GB international swimmer with high hopes for the Commonwealth Games and Rio. For many years, this meant he had to do the morning swim run and be behind his desk at 5.30am and stay until 6.30pm when she finished her evening session.

He used to play a lot of rugby and chaired the junior section of Morpeth Rugby Club, and he referees for Morpeth. His fitness regime has returned him to the weight he was when he gave up playing.

Has he any regrets about becoming a lawyer? “Not at all. Would I advise my kids to come into it? I dont know. Its a completely different world to when I started.

What car do you drive?

Who or what makes you laugh?

What was the last album you bought?

Whats your ideal job, other than the one youve got?

If you had a talking parrot, whats the first thing you would teach it to say?

Something happening to my family.

Whats the best piece of business advice you have ever received?

Never leave it until tomorrow if you can do it today.

Trust me, Im good for the money.

What newspapers do you read, other than The Journal?

How much was your first pay packet and what was it for?

Christmas postman when I was at university not a lot.

How do you keep fit?

Whats your most irritating habit?

Depends who you are.

Which historical or fictional character do you most identify with or admire?

Anyone who has climbed, or attempted to climb, Everest.

Which four famous people would you most like to dine with?

As someone who always gave 110% to whatever I was asked to do.