Pace is delighted to announce that following subsequent clinical assessments of potential adopters of this exciting technology, they have just provided the first NP device to a UK patient.

Twenty-two-year-old Sam sustained traumatic amputations of parts of his left fourth and fifth fingers and was referred to Pace for clinical assessment by his solicitors at Sintons Law.

Initial prosthetic consideration was given to cosmetic devices.  However, with the recent availability of NP devices, a functional solution could also be explored.

As Pace prosthetist Toby Carlsson describes, “Sam was identified as suitable candidate for an MCP Driver for his fourth finger, which is amputated through the proximal interphalangeal joint.”  He continued, “His fifth finger is amputated further distally, through the middle phalanx.  This results in a longer finger remnant.”

Liaison between Pace’s multi-disciplinary team and NP’s Clinical Director Aislinn Wyatt, in Washington (USA), concluded that the fifth digit might be too long to also accommodate a MCP Driver.

As Toby concluded, “It was decided to start by fitting the fourth finger and possibly return to the other at a later date, once the functional benefit from the initial device have been assessed.”

Following a cast and measures of Sam’s hand, the order was placed for the bespoke device.  Eight weeks later it was winging its way across the Atlantic.

An excited Sam attended Pace’s Bredbury clinic, following a few fine-tuning adjustments to optimise fit and function, he was quickly performing dexterous movement and activities, such as stacking cups and grasping different objects.

David Knipe, an Associate at Sintons Law acting on Sam’s behalf explained, “When suffering a life-changing amputation it is imperative that individuals have access to the most effective prosthetic aids available, to allow them to regain as much independence as possible. Significant progress is currently being made in the field of functional prosthetics and we work hard to ensure that our clients have access to the most up to date technology, to help get their lives back on track. Accordingly Sintons have been delighted to collaborate with both Pace Rehabilitation and Naked Prosthetics (USA) in order to make this cutting edge technology available for our client; the first in the UK.”

Sam will return in a few weeks’ time to further evaluate the benefits of the device. 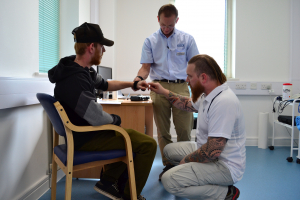